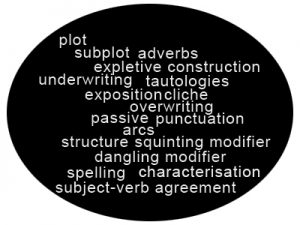 As a writer, you write through a filter. That filter shapes every aspect of your writing – not just the creative elements (plot, content, characters, etc.) but also the technical aspects (grammar, spelling, and punctuation, etc.). All the things you don’t know – that can constitute bad writing – exist in this filter and influence how you express yourself.

Now you might be wondering, What’s an expletive construction? It’s starting a sentence with something like ‘There was’, ‘There were’, ‘There is’, ‘It was’, etc. E.g. There were three boys sitting at the bus stop could easily read Three boys sat at the bus stop. Expletive constructions commonly sneak into writing. Look back over anything you’ve written. See how often you’ve used them, and if a simple rephrase can eliminate them. I bet you’re surprised.

Once you become aware of an issue – and aware that it is an issue – you’ll be mindful of it. You’ll sit there, writing away, and about to do something just as you’ve done one thousand times before, but then you realise, Uh uh. Can’t do it that way. You rethink. You have to come up with a new way to write this passage – this is great, forcing your mind and imagination to expand, because it’s now transcending a pre-existing boundary.

At first, you might be stumped. It might take you minutes to come up with a new way of writing this sentence. You might scratch your head, get up and pace, sigh in frustration, and even have to take a walk. But, with perseverance, you’ll eventually find your way. The next time it’ll come easier. And then easier again. And so on. Until you’re bolting. No pause exists now.

This is what learning’s about: eradicating as many of these issues as possible. The filter – once this big amorphous glob that encompassed a horde of problems – shrinks. These issues are mostly squeezed out. Mostly. You’ll never wholly eliminate everything. Every writer’s early drafts are going to be flawed, no matter how experienced that writer is. But your early drafts get better. You get better. And you continue to think of new ways to say things.

As a writer, you should always seek to improve your craft. Unlike an athlete, who might have a physical peak, and then decline, a writer can continue to improve – well, at least until they enter their dotage and their mind begins to let them down. But, hopefully, there’s many decades of writing before that happens.

Keep learning. Writing is the best form of evolution. Then reading. Then education, such as workshops or courses. But be open.

Always look for ways to develop.

Always find a way to work on your filter.