Tonight, we’re off to a launch! 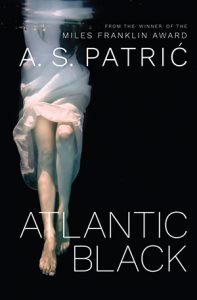 A.S. Patrić, an alumni of Busybird’s short story anthologies 13 Stories and [untitled] issue 2, and author of Black Rock, White City – the winner of the 2016 Miles Franklin – will be launching his new book, Atlantic Black.

Set on an ocean liner, the Aquitania, Atlantic Black tells the story of seventeen-year-old Katerina Klova, who must navigate Aquitania and the guests and crew aboard after her mother suffers a psychotic breakdown. We were privileged to read an advance copy, and it’s a stunning and haunting book. Set over a single day leading into New Year’s Eve 1939, you can feel how painstakingly Patrić has crafted every paragraph, sculpted every sentence, and handpicked every word.

This is something a lot of people – especially people who aren’t writers, or aren’t in any way involved in the writing industry – don’t understand: writing takes a lot of work. Most wouldn’t think so. Most would believe it’s a case of sitting at the keyboard, spilling out your imagination (and that process is apparently immediate), and then having a book at the end of it. There. Done. No problem. No revision. No editing. Nothing like that. The book emerges fully formed.

Let’s do some basic maths – and here, I’m going to err generously on the side of the uninitiated.

A writer might, on average, pound out 500 words per half hour (and this is extremely generous).

That’s 160 hours a writer needs to produce a book.

Let’s break this down further: most writers would have a life going on outside their writing – they may be married and have kids, and on top of that they may be working a full-time job; even if they’re single, they’re likely to be working or studying. Everybody has commitments – professional, personal, and familial.

Hypothetically, this person might wake at 7.00am, go through their morning routine (breakfast, showering, etc.), then get to work around 9.00. Even desk jobs sitting at a computer are tiring – for some, they can be even more tiring, because they’re occupying the same physical space they would as a writer. They work until 5.00, and might not get home until almost 6.00. They then have to make dinner and wash up, so are on the go until 7.00. The evening for the writer with kids will be brimming with responsibilities like homework, dinner, washing up, etc. – depending on the age of the kids, they might need to be supervised. The single writer has more space, but will have their own demands. Whatever the circumstances, at some point, the writer will have to sit down and write.

Let me backstep again to qualify this is erring so generously on everything going right – from how much time they have available to write, to how many words the writer produces, to what they write being usable – that it’s fantastical. Because things don’t go right. The writer might have not slept well, they might have had a tough day at work, unforeseen problems might crop up that take their time and attention. Any of a number of things can happen to derail their efforts to write. And yet they still have to do it. On top of all this, how good is what they’re writing? It might be terrible. It might need revision. It might not fit and have to be discarded. It’s a constant grind of trying to get it all just good enough to finish the damned thing, and then move to the next stage – revision.

Writers will revise extensively. They might have readers who provide feedback on early drafts. More revision follows. If they’re submitting to publishers, they need to prepare synopsises and cover letters – and most writers struggle with diluting their writing into one-page form. If they have a publishing contract, they’ll have structural and then copyediting feedback to attend. Another 80 hours isn’t unrealistic (and, again, errs generously on the side of things going right).

It’s a lot of work, trying to realise a vision their imagination has provided, and articulate it in a way that’ll make sense (i.e. produce a suspension of disbelief), create the universe their story occupies, and engage a reader. And you’ll never please everybody – that’s reality. Just check Goodreads and see the way ratings fluctuate. Most writers who’ve been at their craft for years are wracked with insecurity, knowing everything that could be wrong or could go wrong with their book. They’ll strive to eliminate all those potentialities, yet will obsess over how well they’ve done.

Writing is hard. Anybody who thinks it’s easy doesn’t understand what’s required. Or they’re an idiot. Either way, they don’t appreciate writing as a practice and the work that goes into it. Kudos to those who seriously pursue the undertaking. Even more plaudits to those who finish something.

This is why launches are important – they’re a way to celebrate all that labour and commerorate a book’s arrival into the world.

If you’re in attendance, or follow a writer’s page, let them know how much you appreciate the work they put in.

It’s not easy. It’s never easy. And it should be lauded.

One response to “The Hard Work of Writing”