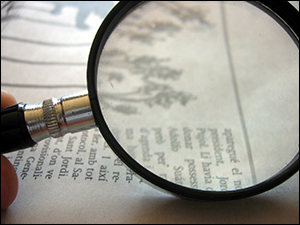 The internet has given everybody a voice.

It’s also provided numerous mediums in which to use it.

One of those mediums is the forum of critique – reviewing books, movies, etc.

Art will always be interpreted subjectively. You don’t need to love – or even like – something just because other people do. That’s fine – we all have different tastes. But criticism should be valid, justifiable, and constructive. Unfortunately, this often isn’t the case. It’s surprising the amount of biased reviews that are out there – reviews driven by a personal agenda.

So what exactly are we looking at?

Okay, let’s look at reviews as they apply to books (although this could easily extend to other mediums of art) …

The Troll Review
Somebody is scathing just for the sake of driving a reaction. Often, the troll review will be outrageous, as it will try to provoke responses. There’s no merit in this review. If you can recognize the troll, stay away. Don’t feed it.

The ‘Witty’ Deconstruction
An analysis using humour (particularly acerbic humour) that dissects the book. The dissection itself could have merit, but it seems the reviewer wants to prove how funny and incisive they can be. While some might laud these reviews, if you really stop to think about them, you’ll see that they can be mean-spirited and cruel – sometimes, without the reviewer even realizing it themselves. It’s tantamount to ridicule.

The ‘I Don’t Get It’
Somebody reviews something they’d never read recreationally, and then criticizes it on the basis that they don’t get it, or it hasn’t piqued their interest. It’s like giving a historical romance to somebody who specializes in science fiction. Reviewers should abstain from reviewing something if they don’t feel they can invest in it for what it is. It shouldn’t start so far back because the reviewer doesn’t like that particular genre.

The Misinterpretation
Close behind the ‘I Don’t Get it’ is the reviewer who misinterprets the book – be it a scene, scenes, or the whole book – and then criticizes it through a raft of misapprehensions. If you’ve read the book these reviews are bashing, you might frown, and think, No, that’s not what happened at all! But the reviewer has misunderstood, misread, or misinterpreted what’s going on; or is clueless and attacks as a diversion from realising their own cluelessness.

The Early Abandonment
Somebody reads only a small portion of a book, can’t get into it for whatever reason, then flicks it. That’s fine as a practice, but it’s not a good foundation for a review. A review should be of the material as a whole, because who knows what might’ve happened the page after the book was abandoned? A review which reads, I read fifty pages but couldn’t get into it so I dumped it. One star might’ve been, if the whole book was read, A slow beginning evolves into a compelling thriller! Three stars.

Undoubtedly, there’s hybrids of these reviews, but these are the principles of bad reviewing, and these examples should give you an idea of how they’re unfair on material, and not judging it on its merit. This is not to excuse bad writing. It’s out there. But too many reviews criticise through the filter of some prejudice – intentionally or not – as these examples demonstrate.

Whenever you critique anything, you need to try empathise with the author’s intent, understand where they’re trying to get to, and then look at what’s working and not working in achieving those objectives. If something’s not working, the criticism needs to transcend personal taste, e.g. I didn’t like this character because he was stupid. Maybe that character’s meant to be stupid, so is that criticism valid? But if the character was stupid, and his actions unbelievable, that could warrant criticism.

If you’re going to write a review – particularly a negative review – think about how you would feel if you received that review, and that should give you a good indication of whether you’re being fair and balanced or not.