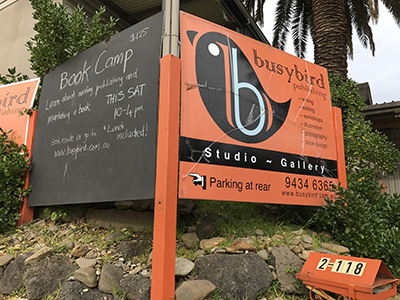 Sitting outside the Busybird Studio are two bits of signage (right) – one is a placard of the business; the second is a chalkboard, which we use to spruik upcoming events.

Not too long ago, an elderly man wandered in to query us about reprinting an old family history. Once we finished talking about the particulars, he asked about the event being advertised on the chalkboard – at that time it was Novelling. We explained that Novelling broke down the craft of writing a novel into simple, understandable components.

‘What’s there to know?’ the old fella asked. ‘Doesn’t it all just come from here?’ He held both hands up to his temples.

That seems a popular misconception from anybody who doesn’t write: all you have to do is sit down, and translate your imagination onto the page. It’ll all come quickly. Easily. And, naturally, it’ll all make sense.

But why should it?

Outside of the presumption, why should it make any sense? It’s tantamount to suggesting you can bake a chocolate cake simply by guessing what ingredients are required, throwing them into the mix, and then shoving it into oven. What do you think the result would be?

Writing something good is harder still.

Just as baking a cake would require a precise measure of ingredients, a strict methodology in how they’re combined, and a design in how it’s baked, writing requires much more than just an imagination. An imagination will give you ideas. That’s it. Staying with our cooking analogy, it would be the equivalent to the thought, I’d like to bake a chocolate cake today. From there, it requires technique, a plan, and diligence. Anything less, and who knows what the result would be?

You could fluke it.

Likelier, you wouldn’t because just as when you approach any endeavor, you need to know and understand how it functions, what’s required, and what’s needed to excel. You wouldn’t expect to walk into a kitchen and be a master chef, or onto a tennis court and expect to be a champion, or into a surgeon’s theatre and expect to know how to operate.

Writing is no different.

You need to understand how structure works, what POVs are, how to plot (and subplot), what VOICE is, how to make characterisations dimensional, what arcs are, how to design and layer your world so that it’s believable, how to avoid pitfalls such as exposition, show versus tell … and this list goes on and on.

Although many might think writing is little more than a hobby, a fun thing to do with bits of your imagination firing away and wanting to tell a story, it – as a craft – deserves respect.

Especially if you want to give it your best shot.