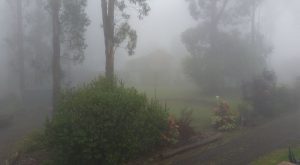 Arriving Early
Except for a gang of cockatoos screeching and catcalling from the treetops, I was alone. A mist had begun to settle, blurring the contours of the new growth eucalypts and the blackened trunks, enclosing me in a thick, white cloud. Dotted among the man ferns and lilly pilly borders, a cluster of corrugated huts sat dark and empty.

It wasn’t quite wilderness but there was something otherworldly, dreamy and a little bit fairy tale about the atmosphere, as I lingered in the car park trying to work out where on earth reception was (I was probably standing right under a sign with big red arrows).

That was our first ten minute writing exercise. I was sitting at a ‘U’ shaped table among a small group of writers, wood fire blazing, rain battering the windows, a mound of chocolates and mints and a brown paper gift bag in front of each of us. Such a nice way to start writing. The scary part wouldn’t happen until later.

Blaise and Les have run several retreats now and the program is well designed. While the retreat focuses on memoir, the workshops are equally applicable to fiction and most other types of creative nonfiction. Nonetheless, I couldn’t help but feel apprehensive when I saw the theme for this retreat spelled out in big black letters: No More Excuses.

Writer’s Block
To kick things off Blaise asked us to make a note of our roadblocks, those issues we have when we sit down to write that suddenly make scrubbing the floor by hand and cleaning grout seem so appealing. Naturally I was convinced that my roadblock was the worst, and I was sure it was incurable. Even though writer’s block is a common complaint, there is no such beast according to Les and Blaise. By lunchtime Saturday I had acquired a whole new insight into the bane of my writing life. The thing I had been bemoaning for all those years was actually a structural problem, and there absolutely is a cure.

My worst writing issue addressed on the first morning. Best workshop ever!

Dinner Time
Despite all the naughty treats, mealtimes were a delight. As a vegetarian, I was expecting dishes where I could pick out the meat, but my meals were gourmet creations: spicy pumpkin and pistachios, stuffed zucchinis and salads flavoured with red currants, toasted almonds and pomegranates. My dishes gave several of my fellow carnivores a few green-eyed moments. Lucky for me, Karen, the proprietor and chef, likes to make all her guests feel special, even the difficult ones, and lucky for the carnivores there was plenty to share around (I was quite prepared to fight for my food, and it looked as if some of the others would too).

The Scary Part
Saturday afternoon: back in the barn, a second-storey room with floor-to-ceiling windows and a hardworking wood heater, Les was handing around the five hundred word memoirs we had all had sent Blaise the previous week. What had I done? I’d emailed ‘The Lost Little Cowgirl’, a piece beset with all the problems that typically weigh down my creative efforts. It was another story-without-an-arc. Just an experiment. What was I thinking?

Every person in the room had an important and fascinating story to tell: from a young mother fleeing the Black Saturday bushfires to a deliciously creepy tale about an anaesthetist tempted to go rogue. Feeling like I didn’t belong, I hunkered down in my seat and tried to hide my nerves. Colleen was the first to comment: ‘It works once you know it’s a story within a story.’ I was touched. The whole group engaged with my strange little piece with curiosity, insight and a sense of humour. Even the scary bits turned out to be fun.

After each critique, Les returned our writing with a professional edit attached. And there, among the suggestions, four comments down, was the nugget I had been searching for. Maybe it would not make a full arc, but it would definitely raise its belly off the ground.

Afterwards
I had wondered what it would be like to spend a whole weekend immersed in my writing and I conjured many scenarios in the weeks before the retreat. What I didn’t expect was to feel so snug as rain and mist sealed off Karma. It was like an island somewhere slightly to the north of reality. And now, as I take my mind back, I have been surprised to find that there are actual, concrete solutions to the slippery swag of issues I lugged up the mountain.

Workshops and retreats are one of the best ways I know to build motivation and momentum and, little by little, I can feel myself edging closer to that place where there will be, No More Excuses.

P.S. A big thank you to everybody for making the weekend so special and an extra thank you to my two lovely nest mates, Liz and Colleen.