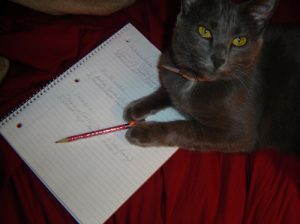 When you’re writing a story, often the question is what should you and shouldn’t you include? Many of us would love to include everything. But this doesn’t necessarily make for entertaining reading. A newspaper editor once told me a fact I’d left out (of an article I was writing) was interesting, but added nothing to the overall story, so it was a good choice to leave it out. This is something you need to ask yourself: is what you’re including adding to the overall story?

Now that can happen in a number of ways. The information might drive the plot, or help with characterisation or setting. Some might argue that any extra information might help with those things – additional information, the argument might be, could offer depth. We could throw in that the protagonist, as a child, owned a three-legged dog. Interesting, no? But here’s the question: how does it contribute to the story? What is it telling us about that character that we need to know? Is it providing context to the decisions they make or they person they’ve become? If it doesn’t have any bearing whatsoever, it’s most likely unnecessary. A better way to think about this if you cut something, and the reader wouldn’t notice it’s been cut – that they don’t feel they’re missing anything – then it doesn’t belong there.

Every sentence should drive the story forward. Each sentence should evolve from the one prior, unless you’re going after something stylistically jarring, e.g. two friends having coffee at a café, when a car accident occurs outside. In this case, there’s no direct evolution from one scene to the next. Instead, we use the abrupt shift to interrupt the established scene. But if that’s not your intent (and, honestly, stylistically this is a device you’d use sparingly), think about how your story unfolds, and the framework of language you use to construct that.

And, in doing that, keep also in mind what you’re not including. As an editor, one of the things I encounter most is authors leaving pivotal scenes off the page. Instead, we get characters referencing something has happened (either in narrative, internalisation, or dialogue), or characters functioning on the crest of some momentous change, yet which we don’t see.

Let’s take the first example: if the characters are referencing something important that happened which we didn’t get to see (as readers), ask yourself why hasn’t that been included? Ask yourself why you’ve decided it’s of greater significance to show people talking about the scene rather than showing the scene itself. There might be legitimate reasons, e.g. in a detective story, the detective might talk to witnesses, who are telling him about a crime. Usually, though, we’d want the big scenes to play out in front of our eyes.

In the second example, a character might’ve experienced an epiphany – only we don’t see the epiphany itself, but pick up after they’ve decided to make some meaningful change in their life. But isn’t the epiphany important? Shouldn’t we see that transformative journey that takes our character from who they were to who they decide they want to be? Shouldn’t the reader be put in that character’s shoes so they can experience their metamorphosis?

Conflict drives storytelling – not conflict in regards to characters arguing or fighting or trying to kill one another. But conflict that compels change within the character and tiers their arc over the course of the story. We all encounter it in our everyday lives. Obstacles compel us to make decisions. Do we do this or do we do that? This drives us to make the decisions we do. Our characters should face the same choices.

Think about those moments you’re not sharing with us, those moments that exist either between chapters, or simply between pages. If you can map that there is a BEFORE in one case and an AFTER in the next, but we don’t witness anything between, ask yourself why you haven’t included that. There might be a justifiable reason. Or it might be you’ve skimmed to get to where you want.

One response to “Off the Page”