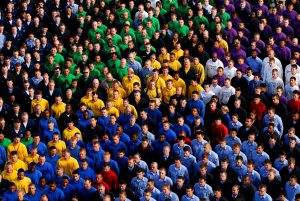 Every piece of writing has an audience. It might be a magazine’s readership, or it might just be for yourself when you vent into your diary or write up a shopping list. Words are communication. And we always choose our words and our messages depending on who is meant to receive that communication.

Modern marketing philosophy gears us towards writing in broad terms – using simple language and direct but detailed descriptions to attract as large a public audience as possible. Nothing wrong with that – if we write for people, then we naturally have a tendency to want as many people as possible to read our writing. Writers like Thomas Pynchon might be famous for doing the opposite, favouring density and the oblique, but who even noticed aside from critics when Pynchon’s 2013 novel came out?

But even if the trend is to broaden one’s audience as much as possible, that doesn’t mean you can ignore the need to consider who your writing is for. Everything – from the specific language you use, to the themes you include in your writing, to the type of story you’re working with – will add up. So how can you narrow down your intended audience? Here are a few nuggets that may help.

Know what your work is about.

This can be trickier than it sounds. Know why? Because sometimes, if you have a perception on what your work is about, it could be correct for the first draft but totally wrong by the final version.

I’m not just talking about story elements either. Whole new themes can pop up from revision – what was a straightforward story about a family may take on larger concerns about the nature of privacy, or the aftermath of the Australian mining boom. Or puppies.

My point is, sometimes you can have a meticulous plan from first to final draft, and even then you may not have a clear view on everything contained therein. Readers will always have their own individual perspectives, but you can always find patterns. When you get other people to read your work before publication (you are doing that, right?), don’t just drill them on what they like or didn’t like. Quiz them on what they thought the story was about. Even if you think you know the answer, you might be surprised at some responses.

Age is important – no matter what the age.

It generally only gets brought up for children’s and young adult books, but age is something to consider across the board. Yes, you need to be more specific with knowing where to position a book for anyone under the age of 18; your book’s language, themes and level of literacy has to take into account a child’s expected level of comprehension. But writing for ‘adults’ needs some targeting as well, and not just when you’re writing about a character being at a certain age.

Even general concepts like ‘privacy’ or ‘family’ often mean different things to different generations. Knowing those differences can be a big help to connecting with the readers you want as part of your audience.

Genre might be a cold, non-creative system, but you still need it.

There’s a lot of hate for genre and pigeon-holing, especially for novels that try to blend different styles or subvert genre conventions. And justifiably so. Shoving a book into a predetermined category can be misleading.

But the genre system is there to help readers sort out what they might like to read. It’s for the reader’s benefit, not the writer’s. Which makes it a blunt tool, but a useful one nonetheless. Use these descriptors to your advantage. Know what genres you’re servicing. Stepping outside of those predesignated zones might result in you alienating your potential readership – or worse, injure your chances of getting published at all.

If you choose to deliberately break genre conventions, choose wisely. Maybe you can subvert traditional fantasy by making magic only a minor influence on the story, but take out the fantastical elements entirely and you sever any connection a reader has with what they expected to read.

Self-publishing, for all its freedom, magnifies these issues.

That isn’t to say that self-publishing isn’t great for a lot of different reasons. But know what you’re getting into – not just in getting your self-published work set up (a whole topic in itself), but in figuring out how the hell you’re going to sell it.

Traditional publishing, for all its shortcomings, at least has a marketing budget (minor as it may be for anyone other than big-ticket names) and dedicated staff who can figure out the best way to publicise your book or collection. In self-publishing, you have to figure that out yourself.

Self-publishing is still an effective method for reaching an audience. But be prepared to sell it. That means knowing from day one who to sell it to.

You can say stuff it to all of this … but at your own risk.

A lot of the creative spirit comes from breaking conventions – playing with language, playing with character development, playing with one’s perceptions of an event or idea. By extension, the same can be true of the conventions that come with a writer’s audience, and the process of targeting and reaching that audience. You can disregard much or even all of the current wisdom and mechanics to find your own readership, in your own way.

But unless you really, really know what you’re doing, it’s probably going to be a bad idea. And even when you have your own plan, it’s a gambit that could break your book’s chances of success.

It may be frustrating to ‘keep the audience in mind’ when writing – it may feel like a restriction, or that it shouldn’t matter yet. But it always matters. You’re communicating, after all, even if the message hasn’t been delivered yet. Always consider who you’re communicating with.