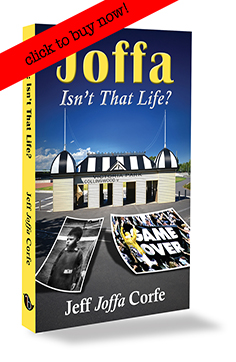 When we first had Joffa into Busybird last year and pitched to him that he should write an autobiography, he expressed several concerns. Firstly, he was worried people would think he was grandstanding.

One thing you discover when you talk to Joffa, though, is that he’s modest, he’s not afraid to poke fun at himself, and he is also selfless – on top of his work with the homeless, he volunteers for several charities, and gives time to make benefit appearances. He has fun in the Collingwood Cheer Squad, but it’s all part of the showmanship of supporting your team. Nothing about Joffa involves grandstanding.

Joffa was also worried about his writing. He admitted he might be shaky on grammar and punctuation, and that he was okay writing short passages (e.g. a page of two), but more than that and he was prone to repetition.

Some might laugh at that, but it’s important for writers to know their strengths and weaknesses. We have dealt with authors who think they’re infallible, are closed to editing, and ultimately their work never realises its potential. To get the best out of your writing, you need to be challenged to think outside your parameters.

When Joffa began turning in chapters, he proved he underrated his writing – it’s evocative, sometimes almost poetic, conjuring strong visuals, whilst keeping the storytelling emotive. We had to clean up some punctuation, grammar, and repetition, but that’s standard with any edit. He was also receptive to areas of the book he had to work on, and some structural reshuffling we performed. He was an editor’s dream as an author.

Once a first draft of the book was completed, it went back and forth between us and Joffa until everybody was happy with it. Joffa produced a compelling read and had the courage to bare himself publically. It’s a good lesson in the virtue of sharing your story – stories touch people, and can have a positive impact on their lives. Joffa’s story promotes a strong message: despite adversity, despite anything you go through, you can make something of your life, and you can do so and develop compassion, empathy, and graciousness.

Joffa himself has come through an abusive upbringing and teenage homelessness, and his daughter has epilepsy, but he’s never played the victim of circumstance, and he hasn’t – as others might have – gone off the rails. If you have a preconception of Joffa that borders on negative, or is maybe even a little derisive, just talk to him for a few minutes and you’ll reshape your impressions.

A big thank you to all the Pozible contributors who pledged money to help make the book a reality. A book is an expensive endeavour: editing, layout, design, promotion, distribution – it all adds up. Busybird Publishing is a boutique micropublisher, and we’re grateful for all the help.

A thank you, too, to wife-and-husband team, Blaise van Hecke and Kev Howlett, owners of Busybird Publishing, Blaise for all her tireless work behind the scenes getting the book going and coordinating the work in putting it and the launch together, Kev for the design of the cover and his ideas throughout; senior editor Melissa Cleeman for her meticulous editing, organising the launch, and her media work to get the book out there; and assistant editors, Rebecca Courtney, Shevon Higgins, Johanna Boutros, Joey To, Lisa Roberts, Isabella Gilmore and, again, Blaise, for their editing on the book and shaping it into what it is; and Tom O’Conell for his tireless proofreading.

Here are the details for the launch:

If you’re intending on coming and haven’t RVSPed, please RVSP immediately, as you’ll need to have your name on the door. So call us on (03) 9434 6365 or drop Melissa an email.