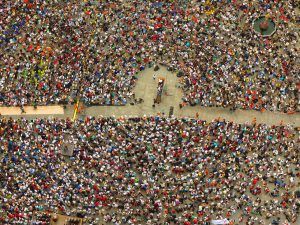 The rise of the blogosphere (is that the official term now?) has enabled countless individuals to establish an online presence and a platform for public discourse. There’s a blog for everything and everyone, with numerous writers of all stages of development contributing to a vast and evolving network of content.

This is great. It allows everyone to be heard and to find an audience. But it hardly needs to be said that the internet is a pretty negative and hostile place a lot of the time. The phrase ‘don’t feed the trolls’ is now a common warning – born from the fact that hordes of users just want to watch people get irrationally angry. We love seeing anger and outrage. We love being angry and outraged. It’s cathartic if nothing else.

Most writers know the impact of criticism. Especially anyone involved in workshops. We weigh our words so that we provide constructive feedback while pointing out the flaws in someone else’s writing. Most writers know how devastating a badly-worded comment can be to the recipient.

But outside of the workshop environment, the claws come out. A writer who can practice this diplomacy can still be guilty of the same pointless savagery in a public field.

I don’t want or need to point fingers or provide links. Just think about the reactions to modern fads in publishing and other creative disciplines. Fifty Shades of Grey. Twilight. The Da Vinci Code (yeah, remember that one?). The public discourse goes beyond satire or actual criticism and turns into a feeding frenzy over a popular piece of work that’s perceived to be irredeemably flawed. We take joy in it. The brutality becomes a fashionable statement. The work itself can lose its own identity. The work’s flaws become the identity.

That isn’t to say that the criticism is invalid. Everything cited above carries its own issues and shortcomings. As does all writing, in varying degrees.

Anyone who’s seen the animated film Ratatouille knows the critic’s monologue. It’s pretty apt for such a brief discourse on the status of a critic – both professional and amateur – and pointing out the responsibility held by anyone who seeks to appraise the work of another. A responsibility that has evaporated with the expansion of the blogosphere.

In the meantime, let me just wind back the heavy-handed social commentary so I can actually get to the point of all this lip-flapping. I wanted to bring this up because the way we perceive and apply ourselves to the creative work of others is important. Especially as creators ourselves.

A good writer is capable of seeing the virtues and shortcomings of someone else’s work in equal measure. In my opinion, part of the evolution in becoming a good writer involves knowing how to approach everything you consume as a blank slate – something to learn from. It might be how to pull off something remarkable, or how developmental or thematic flaws may manifest in an otherwise perfectly marketable and successful work of writing.

I think most writers know this. But the constant vigilance in applying this principle is important. Yes, Fifty Shades of Grey, to take one example, is widely acknowledged as being consistently flawed in its narrative. You might even say it’s a bad book. (Note that I have neither read Fifty Shades of Grey nor seen the film.) But as a produced work that has found a worldwide market, it still has more value than most of the mud being slung its way. I don’t defend its content, but I do defend its existence.

By all means, be passionate in your convictions about whether something works or not. But know what you’re doing when you vocalise those convictions, and how you do so, specially if you’re placing it in the shark-filled waters of the internet. Know the responsibility you carry when you become a commenter on the efforts of others. Not just to protect their egos. But also for self-development as a writer – as someone actively participating in the exact same network that hosts all these pariahs of publishing.

It’s one thing to condemn a book like Fifty Shades of Grey for being popular when it supposedly doesn’t deserve it. It’s a bigger thing, for your own craft, to consider why it’s popular and what can be learned from it – and how the approach can be refined to avoid the same pitfalls. That’s part of what it means to develop as an active writer.