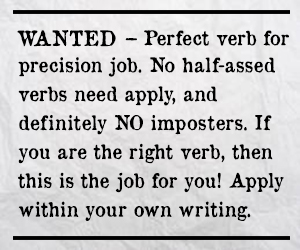 If you wanted to hang a picture, and had to hammer a nail into the wall, you’d use a hammer for the job. Sure, you could probably use the blunt end of an axe, or a heavy-heeled shoe, but the best tool for the job would be the hammer, because that’s what hammers do.

Of course, there are lots of different verbs that do similar things. If this occurs, then you need to find the verb most appropriate for what’s happening. Sometimes, this is easy. Sometimes it’s not.

Consider this scenario: Bob’s partner Gloria sits on the couch in the lounge. The kitchen explodes. Bob wants to get Gloria out of there fast. So how does he grab her from the couch?

Bob grabbed Gloria’s wrist and pulled her from the couch.

It’s simple. No extravagance here. And it works … doesn’t it?

Yes, it works, but lacks the immediacy the situation demands. The damn kitchen’s just blown up! And he’s just pulled her up, like he’s inviting her to dance? Uh uh. So what’s the alternative?

Bob grabbed Gloria’s wrist and pulled her quickly from the couch.

That tells us more, right? He hasn’t just pulled Gloria up; he’s pulled her up quickly! But the reality is if you need an adverb (quickly) to modify your verb (pulled), then your verb’s probably not the right tool for the job. You need to find a verb that is going to do the work of, in this case, ‘pulled quickly’.

Bob grabbed Gloria’s wrist and yanked her from the couch.

How’s that? Better? At the very least, ‘yanked’ communicates the immediacy and urgency the situation demands.

As writers, we develop our craft through one primary tool. Can you guess what it is?

If you said ‘vocabulary’, well, you’re not quite right. A good vocabulary is important, but the primary tool is actually ‘habit’. We like to say things a certain way, use certain phrases, develop certain idiosyncrasies – this becomes our voice. That’s fine, but if we develop the habit that we just go with the first thing that comes to mind, then we won’t think about the verbs (or words) we use.

Stop. Think about it. Look at your narrative. Are the right words doing the right jobs? Or do you have half-assed workers just making a good fist of it? Or, even worse, do you have imposters?

Gloria shouted at Bob, which caused Bob to be upset.

The wind blew across the river, causing the surface to ripple.

At least in the case of yanking Gloria from the couch, pulling is in the realms of the same action – pulled, yanked, jerked, etc. Caused? Well, it tells us something happened, it just doesn’t tell us how. It’s a trigger that turns the actual verbs (upset and ripple) into adjectives. This dilutes what’s going on. Here, we should put the verbs back in charge.

The wind blew across the river, rippling the river’s surface.

The wind rippled the river’s surface.

In any case, aren’t these examples better than the ones using caused?

Get in the habit of thinking about your writing, about the words you’re using, and finding the right ones for the right jobs.