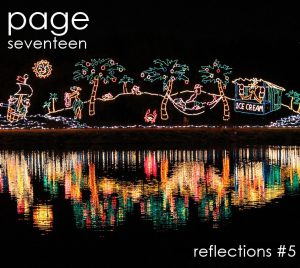 In just over a week, the wait is finally over. The open mic night on 19 November is open invitation, so come along if you can and celebrate the launch of Issue 11 with us!

If you’re curious about some of what you can expect in the latest offering from page seventeen, read on: three more of our latest contributors have a little something to share about their work. Some of it will resonate now, some will hit you later after you’ve read the issue. Either way, maybe there’s something in their path of inspiration that you can relate to, or tale something from? Hmm…

Kevin Gillam on ‘The hush’

‘The hush’ was written as an attempt to create a poem with an utterly tangible syntax, using some of my favourite and deliberately obscure topics as content. The essence of the poem is in the creation of its argumentative voice, one that spins a kind of distorted logic in the hope of being convincing. My own writing style is very like this – always collecting phrases, thoughts and snatches of conversations, particularly from philosophers and scientists in discussion.

Kevin Gillam is a West Australian writer with three books of poetry published: other gravities (2003) and permitted to fall (2007) both with Sunline Press, and ‘songs sul G’ in Two Poets with Fremantle Press (2011). He works as Director of Music at Christ Church Grammar School in Perth.

Holly Zwalf on ‘Out of season’

One cannot help but be aware of an absence that clings to Australian landscape poetry; an absence that seems to suck dry our already barren continent, leaving it flat and drained of colour. The omission of the human inhabitants of these landscapes is sometimes conventional and often political, performing a poetic terra nullius through verse.

I am deeply in love with Australia’s landscapes but I am soon bored by photographs of mountains or statues or sunsets, unless there is a person located somewhere in the shot. While not explicitly political in its content, through my writing I try to offset the natural environment with the people who inhabit it, to locate bodies and their emotions within a wider ecosystem, and to combine confessional and landscape poetry in an attempt to explore the relationship between the personal and the environmental.

Holly Zwalf is a queer smutty spoken word artist and poet who grew up on a boat, but who gets horrifically seasick. She likes free medicare and hates birds in cages.

I started writing this piece while on exchange in Canada. I loved Montreal, but after a month I was homesick. I began reading Australian literature obsessively. I was ignoring coursework. I demanded my housemates read the books so I’d have people to talk with about them. I took on a heavy Australian tone and lexicon. I caught myself saying things I’d never said before: ‘G’day,’ ‘Ooroo,’ and ‘Beaut’ somehow found their way into my everyday conversation.

As part of my exchange I was accepted into a creative writing course instructed by Kathleen Winter, whose invaluable mentorship has kept me writing. The prose I unloaded onto the class was unquestionably Australian. ‘Pikes Ridge’ began as part of a free writing activity during which I wrote about a young boy admiring a mountain. I knew this was going to be a large part of the narrative. Stories like The Kiss by Peter Goldsworthy and The Boat by Alistair MacLeod, which both revolve around young boys in small towns, immediately became strong influences.

From there the story turned into little unconnected, overwritten vignettes of imagery and narrative. By the end of the course major themes were outlined, tensions were exposed, metaphors discovered, and a narrative structure loosely implemented. That was two years ago. It was ninety percent finished when I left Canada, but the last ten percent has taken hours of editing, rearranging, rereading and thinking about to get it to a place that I was happy to start sharing.

Ben Grech is an aspiring teacher and writer living in Melbourne. Writing has been a hobby since he was young. He started taking it seriously when he was accepted into a competitive writing course in Montreal taught by Kathleen Winter, whose intimate mentorship and advice gives him confidence whenever he writes.