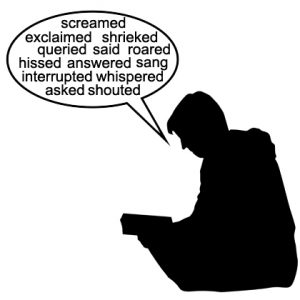 Firstly, let’s define what they are.

They’re the bit of narrative that tells you how dialogue is being said.

‘Hello,’ Bob said.
‘Are you coming over today?’ Gloria asked.
‘I don’t know that I should,’ Bob said.

I saw a blog recently, where the blogger suggested you didn’t have to be boring when it came to using attributors, and then she listed about forty alternatives you could use – things like:

There is a school of thought that if your dialogue is written well enough, ‘said’ and ‘asked’ are the only two attributors you’ll ever need.

Personally, this is a school of thought I subscribe to. If you have a line like this …

’Stop being such a prude!’ exclaimed Gloria.

As an editor, though, I’m not as stringent on authors who decide to be versatile with their attributors. I can concede that things like ‘shouted’ and ‘shrieked’ and ‘screeched’ might have their use to try to offer context, so being a bit lateral with attributors is fine … as long as they’re not extravagant.

‘I’m just a little tired,’ Bob countered.
‘Would you like to go out?’ propositioned Gloria.
‘Maybe tomorrow,’ Bob vacillated.

Actually, I can (and will) say more. Do we really need to know Bob’s counter? Isn’t his answer counter enough? Similarly, isn’t Gloria’s dialogue proposition enough that we don’t need to be told she’s propositioning? (I guess you could say the same for ‘asked’, but that’s so simple, it escapes any especial attention.) Isn’t Bob’s answer enough to tell us he’s putting off the proposition? Do we really need to be told he ‘vacillated’?

Usually, you’ll see the more colourful attributors in children’s and young(er) adult fiction, because the language tends to be vivacious. But when you’re writing for a maturer reader, are fancy attributors really necessary? Isn’t there times when they actually become redundant?

Bob reiterated. Or some might write repeated. Why do we need to be told that dialogue was repeated when the existence of the repeated dialogue is all the proof you need it’s repeated? It’s tautological. And Bob stammered? Lots of writers use something like this, or stuttered, when it would be better just to show us in the dialogue itself, e.g. ‘T –t–tom–m–morrow.’ The hissed and mocked are just colorful descriptors telling us a tone we should imply anyway.

When using adverbs, you need to question their necessity. Whilst I guess Gloria could shriek all manner of ways – angrily or hysterically or happily – you need to ask whether the dialogue isn’t communicating the correct emotional state anyway. In this case, we know Gloria isn’t shrieking happily. She could be hysterical, but we’d hope that the whole picture of the story would contextualise whether Gloria’s prone to such abrupt hysterics. That leaves us with her being angry, which the exclamation point and the shrieked imply is occurring. As for Bob answering defensively, isn’t this self-explanatory?

Others throw in an adverb that mightn’t be as closely related to the dialogue, and is trying to show the character’s state.

‘I think I’ve just about had it with you,’ Gloria said wearily.

Yet again, we need to question the necessity of the adverb. Is it telling us something new? Is it adding layers to Gloria’s character? Providing depth?

Some people use actions as attributors.

Uh uh. You cannot sigh dialogue. Try it. A sigh is an exhalation of breath. Words do not – can not – ride it out. And a snort is a sound people make. These are separate actions. However close their relationship to the dialogue, they should be treated as narrative.

‘You snort like a pig.’ Bob chuckled.
‘You’d know, being one and all.’ Gloria smirked.

Then there’s another school of thought that you can add an adjectival phrase that contextualises not only the dialogue, but the emotional state of the character saying it.

‘You didn’t have to say that.’ Bob’s voice was like sandpaper.

That’s something, isn’t it? And it conjures up an interesting image. Many would argue this adds a new dimension to the dialogue. Whilst I can see why it does (or accept that argument that it does), I’d ask again whether it’s necessary.

Does that mean dialogue needs to be free of any descriptive elements? No. Think about actions that add depth to your characters.

‘You are such a child.’ Gloria tensed, and her shoulders drew up.

This isn’t telling us about the dialogue now, but about Gloria herself. A person might tense when they’re angry or frustrated. You draw your shoulders up when you’re preparing to become aggressive.

As an aside, this little bit here shows us Gloria’s response, and from that we infer our own meaning. All the attributors and adverbs tell us. Which is more effective?

One final thing to consider with dialogue is how often you want to interrupt it – because that’s what attributors, adverbs, adjectival phrases, and actions are doing. You’re interrupting a conversation. In doing that, you need to insinuate yourself as seamlessly as possible to provide whatever additional information you believe is required. Too much becomes disruptive and hurts both the pacing and flow.

Ultimately, we always come back to the same point: how necessary are all these things? If you feel they’re pivotal, the actual query might be that your dialogue itself is not conveying what you want it to.