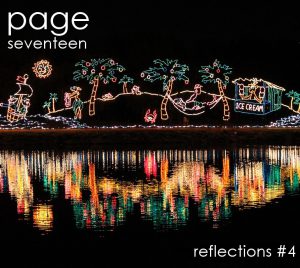 The P17 launch date is fast approaching – not long now until the latest issue of page seventeen is available!

It’s an open invitation to come on down to our launch event and open mic night at the Busybird workshop – 2/118 Para Rd, Montmorency – from 7pm onwards on 19 November.

In the meantime, a couple more of the Issue 11 contributors have offered a little more insight into what went into the latest P17 edition.

Tom O’Connell on ‘The reunion’

My inspirations for ‘The reunion’ are threefold.

Firstly, this story was written in response to the Murakami short ‘All God’s children can dance’, wherein a young man, lied to about his supposed birth by Immaculate Conception, searches for his true biological father. The search culminates on an empty baseball diamond, a final image which has remained with me.

Years ago, I took regular evening walks around the streets of Northcote. On these walks, I often passed sporting grounds where local AFL teams had their weeknight training sessions. During training, the stands and grounds would be empty. The field would be lit, but only coaches and a dozen or so players were present. (I love how this contrasts the bustle of Game Day. Empty sporting grounds are so serene.)

One night, I noticed a hooded figure watching the boys train. The stands were unlit, so he was shrouded in darkness. I passed another night and he was there again. He came regularly. No one paid him any notice. He was probably one of the boys’ fathers, but that didn’t stop me turning over the possibilities. What if he was a spy, or homeless, or generally unhinged? (Amusingly, an earlier draft emphasised this angle.) The idea developed and he became an absentee father.

Finally, I suppose this story was written, in part, to satisfy an innate curiosity about my biological father, whom I have no relationship with. Paternal bonds often figure into my fiction, though never usually this explicitly.

Tom O’Connell is a writer, editor and tea-enthusiast. He is currently studying for a Bachelor of Writing and Publishing and has been published in [untitled], n-SCRIBE, Vine Leaves and Crack the Spine. Follow his writing at artofalmost.wordpress.com.

Jacob Edwards on ‘Parking only’

On deck for the Hilton shanty

Sometimes poetry sprouts like a plant captured in time-lapse, starting out from a single, hidden seed and shooting up while clouds flit skittishly overhead. The bud eventually blossoms into something bearing little resemblance to its progenitor. On other occasions poetry just sails in from life’s oceans, then has to be picked apart and carefully reassembled within the poetic confines of whatever bottle you choose to preserve it in.

‘Parking only’ is of this latter type. It is a true story, and one that struck me as peculiar enough to warrant a place on the mantelpiece, rather than entrusting it solely to memory’s keeping. We did indeed book a room at the Hilton (I was told, after the transaction was made but before we arrived) with some fanciful notion of running into Richard Dawkins in the lobby. He did, through dint of happenstance, check in right next to us; and, due to an ongoing kerfuffle about ‘accessible’ bathrooms, we did nearly allow him to pull off a Mr Snuffleupagus and slip by unnoticed. The confusion, which for me at least remains ongoing, stems from the Hilton’s apparent reluctance to use the word ‘wheelchair’ in conjunction with ‘accessible’. If anything were to be found offensive, I’d have thought it would be the act of omission, as per disabled parking only. What do they have against wheelchairs, I wondered, that they would excise the term and render the phrase nonsensical? Thus a thought came to be bottled.

Jacob Edwards writes creative and academic non-fiction, short stories, reviews and poetry, and has appeared in journals, magazines and anthologies in Australia, New Zealand, England, Canada and the US. He lives in Brisbane with his wife and son, and may be found online (conspicuously not blogging) at www.jacobedwards.id.au.