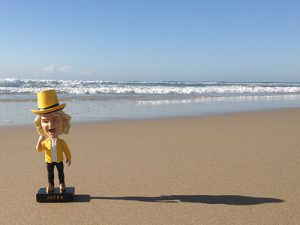 Several months ago, we were sitting on the veranda (of the Busybird Studio ~ Gallery) having lunch and talking about football, when the topic of Joffa came up.

If you follow the AFL, even loosely, you’ll know that Joffa is a member of the Collingwood Cheer Squad, and when it looks as if Collingwood’s won the game, he’ll put on a gold jacket to celebrate the victory. During Collingwood games, cameras will often cut to Joffa for a reaction, particularly if Collingwood isn’t doing too well.

The public perception of Joffa – at least from those who don’t know him – is he’s an inarticulate, loud-mouthed bogan. Actually, Joffa suffers on two fronts: one, the personal stereotyping people impose on him simply by virtue of appearance and, two, because of the stereotyping applied to Collingwood supporters in general.

This was a matter that came up during lunch, and Kev and Blaise – the co-owners of Busybird, as well as supporters of the Hawthorn Football Club – were also curious about his public image. I’d met Joffa in 2001, and had sporadic contact with him pre-game for a couple of years, and then enough to exchange a ‘hello’ and a bit of a chat during games if I bumped into him, and I explained (to Kev and Blaise) that the Joffa who’s portrayed in the media doesn’t reconcile with the real person, and media play up the hoon angle because it makes for better copy.

Kev remarked that he’d recently read an article about Joffa, which talked about his early life where he’d been homeless, and that he now did a lot of charitable work, so it sounded like he had an interesting life. Blaise commented it was surprising nobody had done a book with him, a biography, and then suggested that was something we could maybe approach him about.

It was only a few days later that Joffa came into the studio to talk about the possibility of the book. His concerns were the ability to tell his story in a medium as big as an autobiography, admitting he could be repetitive, and that grammar and punctuation weren’t amongst his best assets, and, more importantly, that he would appear egotistical.

The nature of the book that Busybird wanted to pursue with Joffa was about more than football and the Collingwood Football Club, although obviously they would appear in it by virtue of Joffa’s association with both. But everybody has a story to tell, and Joffa’s life is about more than football, involving a number of elements (abusive upbringing, homelessness, a daughter who has epilepsy) that would appeal to any readers interested in a completely human story.

One of the agreements of the book was that 10% of proceeds would go to the Epilepsy Foundation. At Busybird, several of our books have altruistic outcomes, with a portion of proceeds being donated to various causes, so it was helpful that Joffa felt that a book about him could contribute to helping those with epilepsy (outside of the other charitable work he does himself, that is).

As an aside, we met with the Epilepsy Foundation about the book, who spoke glowingly about Joffa’s involvement with them, his capacity to engage with people, and his fundraising, working tirelessly and uncomplainingly, and often refusing reimbursement for expenses. It’s a far cry from the public image of Joffa, or from the way many would want to portray him.

In any case, a diffident Joffa left that first meeting about whether he could carry out the task. We’re not sure what happened in the ensuing days, but an excited Joffa contacted us not long afterward, eager to tackle the undertaking. Since, he’s steadily delivered chapters, ranging from being about his life to being about football. Our interns have been sorting through the material before it goes to editing, and have been moved by some of the events of Joffa’s life.

The book will be launched in May 2015, but we would like everybody to know that we have a crowd-funding campaign up at Pozible: Joffa Pozible Campaign. The work and expense that goes into a book is not something to be underestimated, and pledges come with great rewards. We also have a Joffa page up on our website now, too: Joffa Book Page.

Keep a look out for ‘Joffa’.

Postscript: You can now subscribe to the Busybird blog, which means you can have our blogs emailed directly to you. Just enter your email address in the light-blue ‘Sign up for the Busybird Blog’ subscription box in the sidebar and his Subscribe!