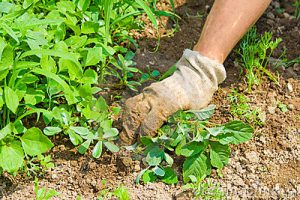 If we don’t tend to a garden regularly enough, weeds take over. Even the least adept gardeners know that basic rule of thumb. The threat of weeds is always there, developing under the surface, creeping in and looking for a spot to break through.

Writing has its own weeds as well. They’re the little creepers that will overrun your writing if you aren’t mindful of it. The clutter that gets in the way of your plants flourishing. They can be tricky little buggers too, flourishing into pretty little flowers that look good on their own, but still ruin the garden they’re thriving in.

Some weeds are easy to get rid of. Others may always pervade your writing and require constant vigilance to keep in check. But it’s always necessary to keep on the lookout for anything which may exist to the detriment of your carefully-laid arrangement.

In Language. It’s common ground now to talk about reducing redundancies in language. Being active instead of passive (‘he ran’ as opposed to ‘he was running’); cutting adverbs and unneeded qualifiers such as ‘very’ and ‘suddenly’; being selective with detail to avoid bogging down the flow of the story. Most of these are pretty easy to edit out after the drafting is complete. Make it easier on yourself by developing habits to avoid their usage in the first place if you can, as in most cases these instances of padded text have little to no redeemable value.

In Characters. Sometimes we have characters that just have no clear purpose. They don’t service the plot in any meaningful way, and have no clear use as a specific narrative device (the comic foil, the moral conscience, and so on). Sometimes they need to be cut entirely to give the reader one less unimportant name to remember. If you’re in need of an extra bit of flavour or extra faces to fill out a crowd, proceed with reservation. Extras are fine as long as their screen time doesn’t outstrip their minor importance.

In Plot Points. From overdoing the backstory to juggling one too many subplots, this one can be tricky to identify and harder to exorcise. If a plot is allowed to meander it might get tangled in the minutiae of subplots and smaller dramatic moments – in short, being derivative. Discussing the management of plot threats is worth a whole other post, but for now it’s enough to give a rule of thumb: that the central plot must always feel like the central source of momentum, and anything else must be carefully managed.

In Themes. Specifically, when thematic content is allowed to grow too fecund and starts choking the life out of the rest of the garden bed. Any regular readers of this blog will already be familiar with my philosophy on keeping thematic development and didacticism a secondary priority in favour of storytelling, so I won’t labour the point. But for fiction especially, readers are seeking to be entertained before anything else. Don’t let thematic focus choke the life out of every other story element.