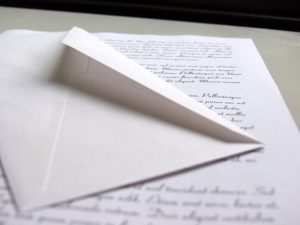 Cover letters – eventually, we all have to write them if we’re to submit to a publisher or an agent.

But is there a trick? A good cover letter shows professionalism, eloquence, and the ability to sell yourself and your book in a limited space.

So, firstly, how long should a cover letter be? One page. That’s it. Don’t spend pages rambling about how great your book is, how great you are, and/or how you’ve been published in 921 other journals – at most, that’s just going to show you babble, and if a publisher or an agent think that of you, they’re going to carry that preconception in when they read your submission.

Open with a paragraph that surmises your story. When we looked at Writing a Synopsis back in May, we used The Hobbit as a template for our examples. So let’s do that here also.

Bilbo Baggins is a Hobbit who is happy to live his quiet, peaceful, and dull life in Hobbiton. He has no time for adventures, but when the Wizard Gandalf visits him, and introduces him to Thorin Oakenshield, the King of the Dwarves, and a party of twelve other dwarves, Bilbo is thrown headlong into an adventure to rescue Dwarven treasure and liberate the ancestral Dwarven homeland from the terrible dragon Smaug.

Obviously, we’re working in broad strokes. We can’t summarise every detail of the story in a single paragraph. What we want is just an overview, and – in this case – an introduction to the protagonist, and possibly a couple of the supporting characters, as well as the plot. But we get the gist: Bilbo, a Wizard, the Dwarf King, a quest, Dragon, treasure, and freeing the homelands. That’s the story in a nutshell.

What we need to do next is summarise the book as a product:

The Hobbit is a 95,000-word YA quest-based fantasy novel I have completed, a story of magic, wondrous lands, and coming of age, where an unlikely hero is compelled to take charge and lead the way, much in a similar vein to The Lion, the Witch, and the Wardrobe.

This gives whoever you’re submitting to an idea of a number of things: the length of the book, the genre, where it sits in the market, and existing books that are comparable. Something you need to accept is that you can write the best story in the world, but if a publisher or agent don’t feel they can sell it, well, in all likelihood you’re screwed, so it’s important to show them the commercial relevance of your story.

Something else you might add to this paragraph are any endorsements the book might’ve received. Did it place in some competition? Or perhaps it received a glowing appraisal from a manuscript assessor known to the publisher? For example:

The Hobbit was also shortlisted for 2013 Best Unpublished Manuscript Award.

In the end, your book’s going to have to stand on its own, but any information that shows the calibre of the material is worth conveying. If it’s placing in competitions or getting glowing recommendation from assessors known in the industry, it shows your writing is strong.

Something else you can include is if you have any (personal or professional) experience relevant to the writing of the book. Let’s say you wrote a crime thriller, and you’ve been a cop for ten years, that would be worth mentioning. In this case, The Hobbit’s actual author, JRR Tolkien, was an English Professor. Extrapolating, I might add:

I’m a Professor of English at Victoria University, where I’ve studied languages and mythology, which has helped me create The Hobbit’s canon, and adds to the texture of the story’s history.

If you don’t have a selling point in this regard, don’t worry about it. It’s not the end of the world. But if you do, again, it’s worth sticking it in.

Next, let’s sell ourselves. Had other publications? Won or placed in competitions? Have a blog? Mention them. If you’ve had a litany of publications, don’t list them all. They’re not interested in a complete biography. Name a few. (And if you’ve included a bit about yourself – as demonstrated above – add this to that section; otherwise, start a new paragraph).

I’ve had stories and articles published in various print and digital journals, such as Overland, Meanjin, [untitled], page seventeen, and others, and my short story, ‘The Long Road’, was highly recommended in the Alan Marshall Short Story Award. I also blog weekly at http://www.leszig.com/

The publications and placings show that you’re writing stuff of a publishable quality, which is an endorsement in itself. It might also demonstrate that you have an existing readership. Of course, there’s a chance you mightn’t have been published, though. Not to worry.

Something else you might consider mentioning is what else you’ve worked on, or what you’re working on next. Another commercial reality is that publishers/agents want to see whether you’re a dabbler as a writer, or whether you’re – potentially – a career author in whom they can invest.

My previous book, The Silmarillion, explored the foundation of Middle-earth, the conception of the Gods, and the wars which tore apart the kingdoms of Men, Elves, and Dwarves. Currently, I’m working on a new book, The Fellowship of the Ring, which involves the war for a magical ring that Bilbo brings back from his adventures in The Hobbit, and the rise of a dark and ancient enemy.

From my own personal experience, an agent rejected the book I was pitching in my cover letter, but requested to see something else I’d mentioned. You have their attention at this point, so it’s worth selling yourself and your writing (but without overdoing it).

Then simply sign-off with something as basic as:

Please find enclosed [or attached, if it’s an email] the material stipulated in your submission guidelines.

And, yes, adhere to submission guidelines – and precisely to guidelines. If they ask for three chapters, don’t give them five because your story really doesn’t get rollicking until chapter three and four. If they specifically request Times New Roman as a font, don’t give them Arial, because you like it best of all the fonts.

If you want to finish with a real flourish, you might look at a denouement:

The Hobbit is a grand adventure that I’m sure will resonate with young adults and adults alike.

But you don’t want to oversell it.

There’s a chance after you’ve done all this, your cover letter is going to be longer than a page. If it is, revise. Go over this thing until it’s as tight as you can make it. Ensure there are no errors on the page – if there’s errors in your cover letter, it’s not going to be the healthiest representative of your writing. So revise, revise, revise. If your cover letter is just over a page, there’s tricks to get around it. But before employing them? Revise. That’s the first and best counter to whittling it down to size.

Otherwise, here are some, um, cheats to get everything fitted on one page:

Keep in mind these tweaks are intended to buy you only a handful of extra lines at most. The best option is always revision.

Finally, personalise who you’re addressing your cover letter to, rather than the generic, ‘To Whom it May Concern’. Ring up the publisher, if need be. Many publishers will have different fiction and nonfiction editors. Personalising the cover letter is not only a nice touch, but it shows you’ve been industrious enough to research them.

Don’t skimp on the cover letter. The cover letter is the first impression you’ll make on a publisher or an agent. Make sure it’s a good one!

2 responses to “Writing a Cover Letter”