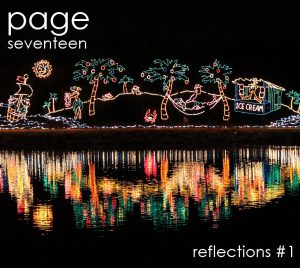 It’s still a little while before Issue 11 is released and available. So in the meantime, until November 19 we can do two things:

1) Shamelessly plug back issues available online here. Some editions are currently out of stock but the most recent issues are still readily available.

Let’s devote a little time to that second point. Many of the P17 contributors for 2014 have kindly provided some insight into their submissions and what went into the work that you’ll be reading come mid-November. We’ll publish these reflections in a steady stream between now and the Issue 11 launch. Be sure to check them out in anticipation of the new issue – and many of these authors have an online presence so be sure to look them up.

Without further adieu, the first three reflections from the P17 #11 alumni. More reflections will follow in the coming weeks.

In ‘Bellarine machines’ the timeless imagery of a beachside caravan park is designed to draw the reader into the space – that safe haven or escape bubble we exist in on holiday. The title is drawn from the Bellarine Peninsula in Victoria, where I experienced a number of caravan park holidays as a child. This kind of holiday escape is an experience that’s familiar to most readers and this poem uses observation and descriptive layering to create that sense of familiarity. I think a lot of the things that truly define us are exposed in these scenarios; when layers are scraped away, life is simpler and there’s more time for reflection. This is a gentle poem that immerses the reader in that space and those ideas.

Vanessa Page is a Brisbane poet. She has published two collections of poetry: Feeding Paper Tigers (ALS Press) and Confessional Box (Walleah Press). She was the winner of the 2013 Anne Elder Award and has twice been named runner-up in the Arts Queensland Thomas Shapcott Prize.

I was involved in the Vietnam Moratoriums in the early 70s and remember clearly the conflict which often arose in families between the older and younger generations.  I’ve always wanted to explore that time in a story but ‘Protest’ only came to life for me when I was able to put it in a modern context.  Seeing televised news reports of more current demonstrations gave me a way of connecting my protagonist, Susan, with those earlier demonstrations of the early seventies.

Protest marches are also a means people have of speaking out about an issue when the normal channels of communication fail.  In my story conflict occurs between the mother and daughter over the daughter’s sexuality but it’s really about the failure of two adults from different generations to communicate and speak openly.  This echoes an earlier mother/daughter conflict in the protagonist’s life.

I like writing stories about family relationships because they are so complex and conflict often involves other family members.  In this case the husband/father is caught in the middle but it’s his steadfastness – and love for his women – that has the power to provide a solution.

Inspiration for stories usually comes from my own life: travel, observations of the natural world and watching how people interact.  Also, many years of reading for pleasure.

Beverley Lello is a writer living in north-east Victoria. Her short stories have been published in Country Style Magazine, page seventeen, fourW (23 and 24), Award Winning Australian Writing (2012, 2013 and 2014) and several anthologies. Beverley has also received a number of awards for her short fiction.

The star of this poem exists – or, at least, he did three months ago – spewing out surprisingly eloquent brimstone at the cold Melbourne night. My small group was armed only with souvlaki and the beginnings of a hangover as we were beset.

He brought to mind Nick Nolte’s infamous mug shot: straggly swords of hair pointing down in diagonals and parallel universes sloshing in his irises – along with all the typecast hobos trudging around South Central from the terrible movies of my youth – food scraps clinging to impressive beards and sandwich-board screeds commanding repentance before the approaching Big Dance.

But this man possessed considerable élan. We watched him for twenty minutes as we scoffed down our lamb and his material was always fresh, rhapsodic, freestyled, almost as if he understood the demographics of his target market – many passing with addled, arts-and-craft store-eyes of their own, several of them twisting and jerking around him in an impromptu rave as street sweepers hissed at approaching morning.