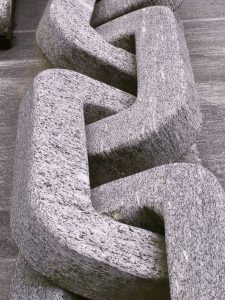 Ah, the blog hop. I’d say it’s a time-honoured practise or other some such malarkey, but blogs aren’t really old enough to claim that kind of institution. So for the time being, let’s just say it’s a bit of harmless fun, and an intermission from page seventeen* and lessons about writing.

I’ve been invited into this chain by Les Zigomanis, who posted his responses to the blog hop’s questions here.

After my turn, two more writers will follow with their responses over the next couple of weeks, so keep an eye on their blogs!

Emilie Collyer is an award winning writer of plays, fiction and poetry. In 2013 her sci-fi play The Good Girl won Best Emerging Writer at Melbourne Fringe and a Green Room nomination. Her new play Once Were Pirates will premiere at Fringe 2014. Her stories have appeared most recently in anthologies: Cosmic Vegetable (USA), Thirteen Stories (AUS), with upcoming stories in Allegory (USA) and Unfettered (AUS). Her short speculative crime fiction has won three prizes at the Scarlet Stiletto Awards (2012 & 2013). Emilie’s first collection A Clean Job and other stories was published with Clan Destine Press in 2013. Website: www.betweenthecracks.net

Luke Thomas is a Queensland writer of short fiction. His work has appeared in [untitled], page seventeen, Award Winning Australian Writing, and the Sleepers Almanac. In 2012, his short story collection, Home Mechanics, was shortlisted in the Queensland Literary Awards for a Manuscript by an Emerging Author. His website is lukethomas.org.

What are you working on at the moment?

As usual, there are several pieces I’m working on at the moment. With my most recent batch I’ve gone back to speculative fiction, something I revisit from time to time. I’ve got three separate short stories in progress: one is a limbo-esque piece where the main characters aren’t sure if they’re dead or alive; another combines vampires with human trafficking themes; and the third is a straightforward thriller with a fantasy setting.

How do you think your work differs from that of other writers in your genre?

The tricky thing there is that I hop between genres a lot. The current batch is fantasy-flavour, but many of the stories I wrote in the months beforehand were more realist and often centred around unlikely or dysfunctional romances. In a few months I’ll probably be playing with something entirely different.

If I have a particular signature that works across anything I write, it’s probably the short, sharp endings. I hate writing neat endings. There’s always a beginning that rises from an ending, or something happening that might have repercussions beyond the natural ending point of that particular story. So I’m always trying to perfect an open-yet-satisfying way of concluding stories.

Why do you write what you write?

I veer towards what interests me at the time. Usually a story I write has an idea or concept acting as its lynchpin, whether that idea is overt or hidden. It might be a theory on the function of dreams, or the debate on rehabilitation v incarceration for prisoners (although I’m usually more open-ended rather than spruiking one side of the debate). Or it might just be what a certain kind of person would do in a particular situation. I’ve always got something new to explore that keeps my motivation up and pushes me to make the new fiction different from my earlier works.

What’s your writing process, and how does it work?

My fetish is whiteboards. I have a large one just above my computer and an A4-size board I can carry around the house. Once I have an idea I often sketch out plot points, character relationships or priorities on the board as a brainstorming process. I don’t plan everything right down to the smallest detail, as some adjustments always develop during the actual writing process.

The writing itself is usually in short bursts. I’ll often have a couple of pieces open at once for the original draft, so I can hop between projects when I need time to think about the direction one of them will take. I always need a break of at least a couple of days before re-drafting or editing, so that I can view everything with fresh eyes. There could be several redrafts and rounds of editing before I’m happy with the end result.

Feel free to have a go at the questions yourselves, and be sure to keep an eye on Emilie and Luke’s blogs for their responses. After all, every writer has their own particular fingerprint and way or working with ideas.

* For anyone hungry for P17 news, be sure to watch this space next Tuesday, 19 August, when we’ll announce our 2014 competition shortlists!