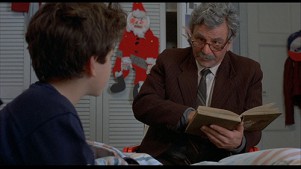 ‘When I was your age, television was called books.’
– Grandpa
The Princess Bride.

I’ve never understood people who don’t read. From as early as I can remember, I had a book of some sort in my hand – as a kid, they might be comics; then stuff like the various adventures of Asterix & Obelix, or Tintin; then novels.

There’s a relationship that you get from a book that you just don’t get from any other form of storytelling entertainment. That’s not to invalidate those other forms. There’s always great television series playing. Tune in and you devote yourself to them. It’s not unusual to discuss what happened with friends or family. When we’ve been impressed, how many times have you prefixed a question with, ‘Did you see …?’ or we debate the actions the characters took or what might occur next. If it’s something terrible, we’ll deconstruct it.

It’s the same thing with movies or theater. We’ll sit in a cinema or theater, amongst strangers, and share the experience. If it’s particularly good, we might chorus with laughter or shrieks or sit tensely. If it’s horrible, we might groan or – the more audacious amongst us – might mock it loudly. Afterward, we’ll go through the same examination of the stories and characters.

One of the strengths of these mediums is that they’re very visually and aurally-oriented – particularly in contemporary film and television. There’s very little filmmakers can’t do with CGI, creating worlds and effects that would’ve been impossible just ten years ago. Aurally, both are about more than sound effects (impressive in their own right), but also about the scores.

Watch any film John Williams has scored – e.g. Jaws, Star Wars, ET, Superman, Raiders of the Lost Ark, amongst others – and listen to how the music sometimes not only adds a new dimension to what you’re seeing, but breathes life into it. Many of the people responsible for the early cuts of Star Wars (including George Lucas himself) felt the movie was flat. When John Williams’s score was added, the movie came alive.

Another example is Alfred Hitchcock’s Psycho. Hitchcock originally wanted the famous shower scene to occur without any musical backing. Composer Bernard Herrmann scored it anyway. Hitchcock was furious, but when he heard the score – that tune that’s become so iconic – he changed his mind (and would later pay Herrmann twice his fee as a bonus for the overall score). Could you imagine that shower scene without it?

But there are things that can go wrong in television and movies and plays, as well as all their derivatives (musicals, webisodes, etc.). As with books, the story itself can be lacking, the pacing can be odd, the plotting could be uneven, it could be haphazardly told, and so on. Specific to these mediums, actors might be miscast (e.g. Bonfire of the Vanities), performances could be bad, effects might be laughable, etc.

Books themselves aren’t infallible. Just as we might’ve seen bad television or films, we’ve all read bad books, or books which haven’t resonated with us, (even if they’re regarded as classics). But – for mine – their strength has been the intimate relationship they create with you as a reader. It’s a marriage of you and the book. The words are a framework for your imagination to fill in the details. From there, you are immersed in the book’s world – a world that might be impossible to realise through any other medium.

Similarly with the story itself. Books can span millennia. Characters can begin as babies and we can witness their whole lives unfold before our eyes. Stories can be told disjointedly. There’s nothing a book can’t do, their only parameters the author’s imagination. Whilst film and television can do some astonishing things, there are – and probably always will be – limitations.

Then it’s just you and the story. Even the author themselves can become anonymous at this point, or only be represented through their voice. A bad book can help you even the legs on that uneven table. A good book takes you away until there’s nothing but yourself in this unfolding world. You are a disembodied spectator, becoming more and more invested until, with regret, you have to leave the story. Ever read a book and rued the pages are running out? Not a lot of other forms of entertainment can generate that sort of lament.

The best thing is you can take a book just about anywhere and dip into it anytime – read it on a train, in the tub, on the toilet, waiting for a doctor’s appointment, or whatever the case might be.

Reading’s something you can always do. And there’s always a new story waiting.