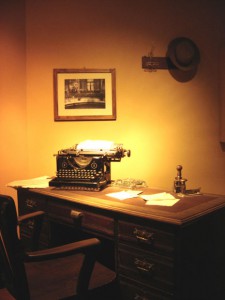 One of the enemies of interesting writing is exposition. We’re all guilty of it. At times, we need to provide backstory. The question is not only how we put this across, but how much we ask the reader to indulge us.

Let’s start with a basic premise: Bob is a sixty-seven year old widower who lives alone. His wife recently died and Bob is having trouble adjusting. This isn’t the story itself, though. The actual story is about Bob suspecting his charming young neighbour might be a serial killer, and Bob’s growing obsession to prove whether that’s the case. But, of course, we do need to set the scene of who Bob is.

Bob came home. The emptiness of the house confronted him. He grabbed a beer from the fridge and sank into the recliner. It was so quiet.
It hadn’t always been this way, of course. Once the house had been full of laughter and love and warmth. Bob remembered when he and Gloria had first bought the house forty-two years ago. Then there’d been the kids and lots of memories, good and bad. But now Gloria was gone. Bob couldn’t believe it. Gloria had died – a heart attack as she’d been baking scones. She’d collapsed and as Bob had held her in his hands, he’d called paramedics, but by the time they’d arrived it was too late. She was gone. Bob had cried over her body. He hadn’t wanted to let her go. The paramedics had to coax him clear. The kids, now fully-grown, had arrived and eased him away …

The first paragraph is simple enough: a man comes home and we know immediately that the house is empty and quiet. Even the act of getting a beer could be construed either as a habit or a method of coping. The twenty-six words in the first paragraph are hardly Hemmingway, but they do set the scene effectively.

The second paragraph is the evil exposition. As an aside, this is a brief example. Lots of writers – even established authors – will digress into reams of it to arm the reader with all the information they need to navigate the way through the rest of their story.

There are some nice moments in the second paragraph, but there are also opportunities to have explored Bob’s backstory evocatively, instead of just telling the reader about it.

Think about other ways we could’ve learned about Bob. There are easy methods, e.g. pictures of Bob, Gloria, the kids and grandkids might litter the mantel. Or Bob might begin to call to Gloria, to tell her he’s home, simply because it’s a habit that’s been ingrained over a marriage of forty-two years. We’re told Gloria died while baking scones; perhaps Bob feels trepidation when he goes into the kitchen, or when he faces the spot where she died.

The other thing worth considering – and a very important one at that, too – is we don’t need to know everything at once. Sometimes, as writers, we’re so immersed with our own cleverness, or to get our story out as quickly as possible, that we dump every bit of information we have on our readers. Here, these two paragraphs give us the length of Bob’s marriage, Gloria’s death, the means of her death, Bob’s heartbreak, the fact that Bob lives alone, that he has kids and they’re now full-grown, and on this list goes. But does the reader need to know all this as of yesterday?

Alternatively, this information could be seeded throughout the course of the story. We might toy with the reader, and tease the possibility that Bob lives alone – ah, so maybe he’s a crotchety old bachelor. But in a discussion with a neighbour, he might reveal he was married. Another mystery – Bob was married, but what happened to the marriage? Perhaps we paint him as a likely divorcee. Bob might feel a chill and quickening heartbeat whenever he goes into the kitchen and we might leave the reader with just that titbit. It’s intriguing – a hook. Later, we might fill out the details. One of Bob’s kids might show up and talk about Gloria’s death on the kitchen floor. We continue to fill out Bob’s history but do it in a way that’s interesting and evocative, instead of simply telling the reader everything. It also builds the mood and the characters, and does so while we continue to tell the rest of the story about the charming young neighbour possibly being a serial killer.

Exposition is a necessary evil at times, but it doesn’t have to become unwieldy. Think about how you intend to share any backstory.