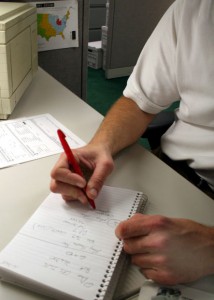 Trying to write but can’t get started? Or it’s just not working? Here’s some random tips to consider.

1. It’s all right.
As has already been mentioned in this blog, don’t be too judgemental of your first drafts (or any draft, for that matter), even if they seem ugly to you. They provide raw material to work with. Once you have it out there, it’s easier to decide which way to take it – what works, what doesn’t, what can be explored further, and what’s overdone.

2. Take a step back
Let’s say you’re just about to write a dramatic scene in which your protagonist finds out he’s adopted. You have the idea in your head: he finds the adoption papers in his parents’ bedroom. Yet you can’t get it started. Everything you try doesn’t work. Pull back a step. Instead of starting the scene in the bedroom, start it when the protagonist first comes home. Or when he’s cycling home from school. Or during the last class at school. The point is to change the angle on what’s happening. It helps to provide a different hook into your world. Sometimes, you’ll get better material out of it. Other times, all you might get is a warm-up (to be cut later) back into the big scene

3. Write every day
Writing’s about momentum. Don’t write, and it gets harder to get started. Write, and your ideas snowball, you’ll look more and more forward to your next session, your story will progressively reveal itself. As an aside to this point, don’t besmirch limited time – if you have only fifteen minutes, don’t look down at it as not enough. Use it. It adds up.

4. Have your own writing space
And make sure people know it’s yours. This might be hard if you have a two-year-old constantly wandering in, but otherwise set up your own little writer’s retreat. Fill it with whatever you need to put you in the mood. If there’s people in your life – e.g. partner, family, housemate – old enough to understand the significance of this space in your life, make sure they respect it.

5. Mood music
It helps. You might have a sad scene – a tragic death. Throw on some Beethoven. You might be writing a Young Adult drama. Throw on some pop. The right music can help attune your thoughts and put you in the right mood for whatever you’re writing.

6. There is no right way to write
You might look at somebody who maps out every step of their story and wonder whether you should do the same. Or perhaps you don’t write your story chronologically, and are debating whether you should because that’s what everybody else does. There is no right way to write. What works for one mightn’t work for another. Do what works for you.

7. Push
If you have writer’s block, push through it. Similarly to the previous point about taking a step back, come at it from a different angle. Don’t throw your arms up in resignation and surrender to writer’s block because it’s fashionable, or it’s cool to martyr yourself to other writers that you’re suffering the most traumatic writer’s block imaginable. A lot of times, if you try, you will be able to push through. Don’t accept that the block is impenetrable.

8. Finish what your start
It’s easy to start stories. That’s when your excitement’s bubbling – the idea’s fresh in your head, bursting to come out, and you’ve probably thought and thought about how it begins or have been eager enough to just blurt it onto the page. Great. But that enthusiasm wanes. Writing gets hard as you hit flat spots, as you have to move the character from Point A to Point B, and the journey itself isn’t appealing. For many, it’s much easier to start something new and exciting. No. Finish what you’ve started. There’s not much that can be done with a half-completed story. If there’s a journal or publisher out there who says, ‘We want your half-finished piece, send it to us!’ I haven’t encountered it yet.

9. The journey can be exciting
So, hypothetically, Point A is a man quits his job in disgust and leaves work early. Point B is he comes home to find his wife in bed with the neighbour. Both dramatic scenes. And sometimes, the journey from one to other might suffice as, ‘He went home.’ But think about the journey. You can get some great stuff out of it at times. You can set the character’s mood, build their mindset, explore circumstances – lots of cool stuff which might go unexploited just because you always want to hit those high points.

10. Write what you love
This is a belaboured point, but write the story you want to tell. If you really want to tell that space opera, then right that space opera. Don’t write the novel about the sparkling vampires simply because you think there’ll possibly be a few bucks in it. Writing is expression and creation. Express and create your passions.