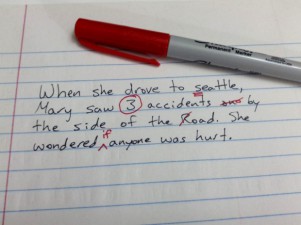 First drafts – how good are they?
A few people have commented that Ernest Hemmingway is quoted as saying, ‘The first draft of anything is shit.’  In the August Busybird newsletter, author Ryan O’Neill said, ‘I hate writing first drafts … First drafts are horrible.’  And speaking in terms of the finished product, yes, they are.  They’re rough, filled with errors, and usually overwritten in some placed and underwritten in others.  Yes, they can be terrible.

However (a good however, too) they give you material to work with.  What would you rather have?  A blank page staring defiantly at you?  Or a page filled with words?  They mightn’t be the best words, but they give you raw material that can then be shaped.  Don’t ever besmirch your first draft efforts.  It’s better than having nothing.  And even if it doesn’t work, it shows you which way not to go.  Usually, as you write (and as I write), new avenues will occur to me, revealed to me as if the first draft were headlights on a darkened road.

But I can’t make my first draft any better!
Shudder.  We see so many stories for [untitled] that are great prospects but rough.  So often at content meetings we remark that a story needs a redrafting or two.  Some authors (and I know this from experience, from when I was young and an idiot) are in such a rush to get their story out into the world, they submit it without taking the time to revise, revise, revise.  A lot of times, you only get one shot at this.  Make sure you make the best first impression you can.

I don’t see anything wrong with my draft, though …
Go over it and go over it and go over it until you reach this point.  Exact every opportunity you can to improve your draft.  Then, when you feel there’s nothing more that you can do, put it aside for a week or two.  Get some space from it.  Freshen your objectivity.  You’d be amazed what you’ll be able to see once you’ve gotten some space from it.  It’s like that saying, ‘Can’t see the forest for the trees.’  Well, time to get out of the forest for a little while.  Then plunge back into it.

When you truly can’t get anything more out of it, get opinions from friends – and not just friends who’ll give you a perfunctory, ‘Yeah, it was good.’  Develop friendships with other writers whose opinions you respect.  Join a workshopping group.  Then work on it some more.

That doesn’t sound glamorous at all
No.  Many think writing is about writing a story, finding a publisher, and getting a bestseller.  Writing is as much about rewriting (multiplied ad nauseam) as it is about writing.  It’s hard.  It’s frustrating.  You’ll grow to dread going back into the forest, fearing you won’t find you’ll miss something vital, or won’t have the words to revise something that can be improved.

A lot of great writers are crippled by self-doubt.  This is probably the reason: the insecurity of not getting something right or not being able to.  Much better to be oblivious, and just send stuff out into the world once its done, regardless of the quality.  But if you’re doing this, you’re not getting the best out of yourself or out of your writing.

When does it end?
This is a question we get during workshops: ‘When do you call it quits?’  There’s no definitive answer.  I can’t suggest It’s not like a certain amount of drafts equals magic.  But redrafting – if you’ll excuse the cliché – is a muscle.  By working it, you’ll learn to judge when to redraft, when to step back, when to ask for feedback, and when to submit.

You’ll develop a recognition of those boundaries, as well as the awareness of when to push them, when to cross them, and when to let go.

One last note on revision …
It’s also important to recognise when your revision is meaningful and when it amounts to shuffling deck chair.  You can juggle words and tweak prose without ever impacting the meaning.  Again, this is something you’ll become aware of  of your narrative.  Try to distinguish when you are shuffling deck chairs and when you’re manning lifeboats.  Again, it’s a skill that will develop with time.

Oh, before I forget, a postscript …!
Don’t forget Michelle Endersby’s exhibition ‘Floribunda opens this Saturday at the Busybird Publishing Studio ~ Gallery.  Check out our Events page for more details, or last week’s blog.